Spanish studies and adventures in Nicaragua

Just returned to mainland after four lazy days on the island Ometepe in Nicaragua. I am using the computer in an internet cafe in the sleepy town Ribas where my bus to San Jose, Costa Rica, will leave in two hours. Can not believe another two weeks passed by.

But let´s begin where last post ended. Me and my friend Louise left the island Roatan in Honduras with plane. Costly but comfy. Arriving in the lovely town Granada I immediately knew what made my Honduras experience a bit duller than I had hoped for. The good spirit was missing in Honduras. It is hard to explain this feeling. But as a friendly man with Garifuna heritage drove us to the airport, through the  green Roatan landscapes, with latino beats loud on the stereo (hardly heard in Roatan)  Louise said “the feeling of Roatan is different with lation music, now it really feels like the Caribbean”. I couldn´t agree more.

Granada was a very positive experience and Louise last days of vacation were filled with a boat tour to Las Isletas (a big group of islands formed 10000 year ago when the Volcano Mombacho erupted), a tour on a horse drawn carriage, party with a bunch of middle aged stockbrokers from North America and getting a nice massage. The place we stayed in was a real  gem. An Irish man called Gerald runs a beautiful place called “Casa del Aqua”. He has an eye for details and the best matrasses on this trip, so far. 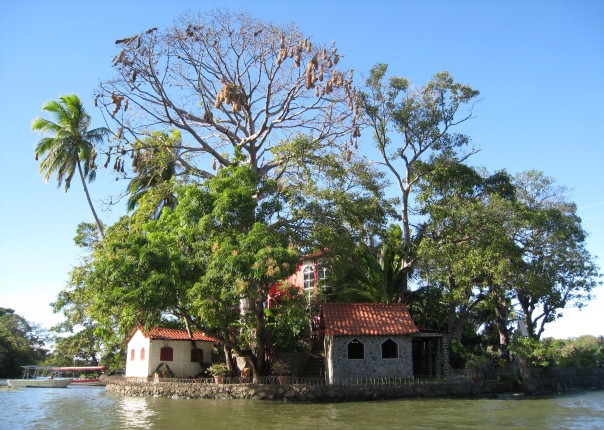 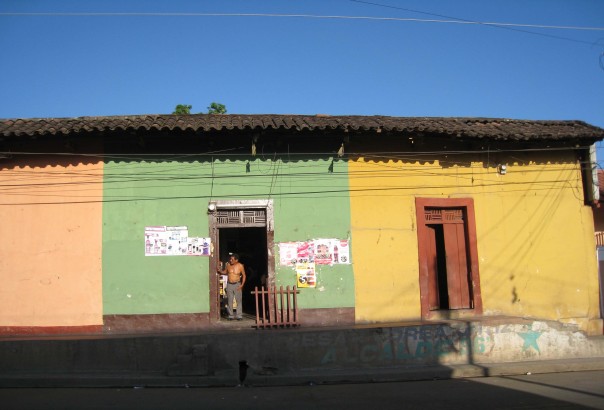 After a wonderful weekend in Granda, a colourful colonial city with lots of charm and local spirit, the Lake Apoyo adventures could start. As Louise and me were going the same direction (she to the airport in Managua) we shared a cab. My ride was supposed to take 20 minutes but I didn’t reach Estaction Ecologica until 2 hours and 15 minutes later. The driver got lost at first and since time was running out he had to drive Louise to the aiport first and I had to come along.

I had red so much positive reviews of Estaction Ecologica, not to mention all the beautiful pictures online.  When I arrived nothing seemed to be what I had expected. Luckily a Danish girl called Birgitte cheered me up by inviting me to come along for a swim by the lake. I had heard so much about this crater lake, but honsetly I was not too amazed. After two hours I decided to walk back alone but after 50 meters I heard gunshots and from a distance I also saw a drunk man with a big machete. There were screamings and stone throwing and as a Nicaraguan family infront of me started running I did so too. I realized later how lucky I was. I was 1 minut from a real drama. 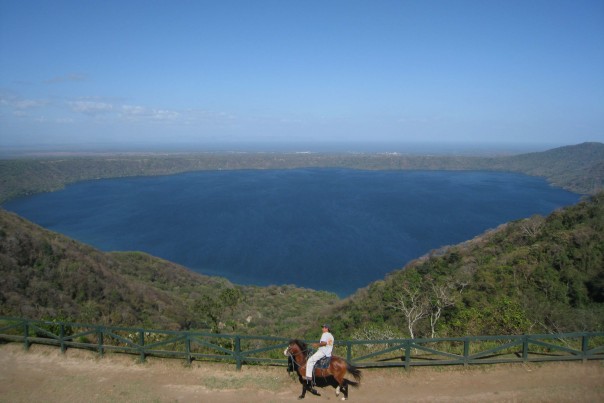 After this one story after the other popped up. Lonely Planets intro to Nicaragua says that it is the safest country in Central America to travel in and that it is easy to get around. I do not agree on any of those statements. One german girl that stayed in the hostel next door got robbed on absolutely all her belongings when she (stupidly enough) decided to hitchhike with a “friendly local”. Perhaps there are not as many killings here as in ex Honduras but it is certainly not a safe country. People are poor and robbery is very common. The are no shuttle services like in other Central American countries. The only options are taxi or chicken bus and considering I chose safety first you may already have guessed that travelling solo is not as smooth as I had hoped for.

So there I was in Estaction Ecologica which maybe used to be an interesting place. But since half the property (the nice part) was lost in a neighbour fight, and what was left was poorly maintained and the research activities seemed to have stopped, I was seriously thinking of leaving the place. The owner, a long haired biologist who loved to hold long political monologues, was more concerned to have a good image on internet than to take care of the needs of his guests and volunteers.

Thanks to Birgitte, Lina, Ineke and Connie and my sweet Spaninsh teacher I stayed the full week and actually ended up collecting many good and peculiar memories. Line, a Danish girl and Ineke, a Dutch girl were long term guests as they had both travelled with volontary organisations from their home countries. Connie arrived the same time as me and Birgitte I just got to know for one short, but action filled day. Line and Ineke inspired the rest of us to make the best of each day in best possible way. Twice a week they went to the nearby city Masaya with chickenbus and me and Connie were happy to have them as our private guides during half a day. One night the owner even decided to collect some bats for spontanious research which gave  the opportunity for a close up with this fun animal that is actually very cute. Connie and me visited an active volcano one day and a small pottery village another day. And so the days went past. Although I did not see a single Tarantula (Line and Ineke had seen them a few times). 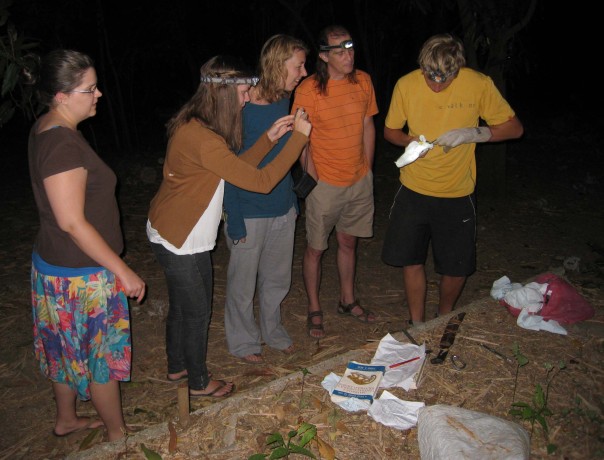 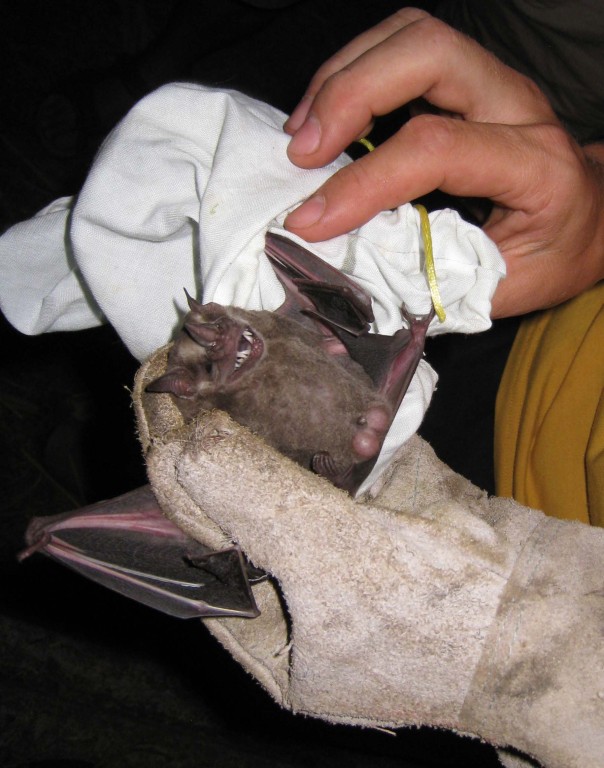 My last stop in Nicaragua was the spectacular island Ometepe in lake Nicaragua. The reason it is spectacular is that it is an island with two volcanos on it, whereof one active. The island is peaceful and pigs, chickens, cows and horses are walking around freely everywhere. Except for a beautiful kayak trip I just stayed in my absolutely gorgeous cabana at Finca Mystica. Yet another place to put on my highlight list. In a while a leave Nicaragua with great memories from a fun weekend in Granada, a peculiar week of Spanish studies and new acquaintances at Laguna de Apoyo and a few days of philosophizing in my hammock in Ometepe Island. Costa Rica Next! 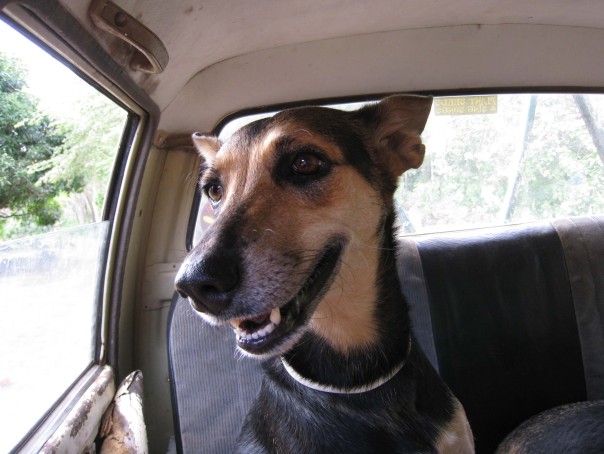 The next trip that is waiting around the corner (Feb/Mar 2012) is an almost nine weeks long holiday to Florida, Honduras, Nicaragua, Costa Rica and Panama. The first four weeks will be done together with my friend Louise. We went away this year in February to Costa Rica, Guatemala, Belize and Mexico and liked it so much more that we want to explore of this fantastic region.

Planning and arranging things for such a trip is really half the fun. Nowadays I pretty much like to pre-book and plan my trip in advance. Some might think that is boring and I would have thought too a few years ago. But this is just a way that suits me nowadays (especially when time is limited). It is very relaxed to not have to think about too much practicalities once on holiday. This way I also make sure not to miss out on any highlights since I do lot´s of research already from home. And it is just so much fun to enjoy everything twice, online and in real 😉

So where are we going? Right now in the planning stage it looks like this:

This was my first post and first update, there is much more to come. And here is a picture of my friend Louise and me last year in Costa Rica. Louise is a great travel mate. We are both structured but adventurous and like a mix of beach, city life and beautiful & tranquil scenery. We like to go to bed early (unless there is a party ;-)), need food every three hours and around two in the afternoon we both get cravings for cold beer 😀 Now, that is what I call a good match!